There are many aspects of growth. It’s really complex when you think about it. Just because something grows, doesn’t mean it’s thriving. There’s growth in surviving, too. But it’s a different kind of growth. It’s not full. It’s not healthy. It’s growth that never reaches its full potential.

I’ve thought a lot about growth. When I think about the first 29 years of my life, I know I grew. Physically, emotionally. But that growth was stunted by the environment I was in. I was in survival mode. I grew in ways I had to in order to stay alive. But that didn’t make me healthy. That didn’t make it all right.

And then I think about where I am now. Two years of freedom; two years of tremendous growth. I wrote a commendable thesis, graduated college, established my support organization, started grad school, became a notable writer, co-wrote a book, and even started work on a second. It’s no longer about surviving. Now it’s about thriving.

But even that tremendous growth could not have occurred without the darkness I experienced before it. The losses I experienced, the grief and the pain, they were part of my growth, too. They were sitting underneath the roots of my existence this whole time. It just took the right environment for the real growth to take place. It took light to overcome the darkness.

When I first thought of burning those cards and letters, my initial plan was to bury the ashes in the yard. But as I thought about it more, I found it to be too dismissive. Even though I let go, those feelings and those experiences were still a part of who I became.

So I saved the ashes, and I spread them across the bottom of a planter. Then I added in some dirt. And then I placed the stones of what I’ve lost on top. They were the stones I have been holding on to for almost a year now: Family, mother, father, self, support, love, purpose, and hope. These were the losses I experienced in childhood, the losses I was still experiencing even after I ran away. 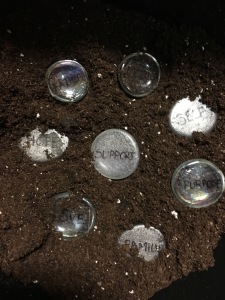 I no longer needed to carry those stones with me. In a way, I was letting go of them. But I was also acknowledging what has come from them. I lost my family, but I’ve been making a new one along the way. I lost my mother, but that loss has pushed me to help others. I lost my father, but that loss has driven me to take better care so I don’t end up like him. I lost my self, but I am working to find myself again. I lost support in more ways than one, but somehow that loss sent me to where I am today, surrounded by supportive people. I lost love in the sense that I never got to experience it before, but now I have — through those people who continue to support me. I lost my purpose because I believed for so long that I had no purpose. But I have found my purpose in using my experiences to help others. I lost hope a very long time ago, as a child who grew up believing that there was no way out of the pain but to die. But I now know what life can be; I know that I don’t have to die. All of these losses created me. They led to my growth.

And now they are supporting a new growth, because above the eight stones, I planted eight peace lilies.

The peace lily is also a symbol of grief, of innocence and rebirth. And in many ways, my freedom has been a rebirth. What lies in the dirt below the seeds, my losses, the ashes of my pain, they are what came before me. They are what led me to my new life. Parts now unseen, hidden below, but nonetheless affecting.

My peace lilies are growing in the light now, just like me.