I had another thrilling 2 hour therapy session.  It started out okay.  We talked about my upcoming job interview (tomorrow – I haven’t had a chance to mention it), about my blogging orientation for HealthyPlace on Wednesday, and about my inability to set up an appointment with the social worker so I can get my medications adjusted and refilled.  Yep.  Mind you, I’ve been back and forth over the phone with the social worker since I got out of the hospital back in the beginning of August and she has yet to set up an appointment with me or get me set up with the psychiatrist.  Now I have two weeks of medication before I am left with nothing.  So, that’s going to be an issue.  Something is always an issue.

As I finished the picture, I started to hate it.  My therapist asked me what was wrong.  I said it wasn’t perfect.  She came over next to me and looked at it, and like a typical therapist said “nope, I don’t see anything wrong with it.”  Then Charlie started to chime in.  Of course it’s not perfect.  It looks like shit.  Everything is shit.  So then I was having an argument with Charlie in my head while simultaneously trying to listen and interact with my therapist.  For the record, that is just not possible for very long.  Charlie ended up winning that battle.  When I came back to the present, and my therapist began to talk about him (he did not tell her his name – she asked what letter his name started with and he told her a ‘C’), I knew right away who it was because I remembered arguing with him internally right before.  And it was funny because my therapist said how he didn’t say much.  He certainly doesn’t shut up when he talks to me.  Weird.  Boys.

My therapist told me to try to think about what a 15 year-old boy would want.  I…well…I don’t know.  I’m not sure I want to know.  That’s entering a dangerous zone.  I don’t want to know about teenage boys.  How did I end up with a teenage boy part anyway?  The teenage boys I knew in high school were atypical bookworm types.  I doubt that’s who Charlie is.  I don’t know how to be a boy.  Not that I’m a girly girl in any sense either, but…I don’t know.  This is going to be hard work.

My therapist also brought up Charlie’s and Anna’s self-injurious tendencies.  She asked me if I wanted her to stop those behaviors or allow them to continue (within reason).  Shit.  I don’t know.  I mean, is there a right answer?  No one wants to hurt.  She asked me what I thought the reasons behind the self-injury were.  Do I think they are doing it to try to get people to see that they are hurting, or is it something else?  I don’t know.  Why would a seven year-old self-injure?  How does a seven year-old even know how to self-injure?  I don’t think Anna knows what she’s doing is self-injury.  I remember writing down that she told my therapist she was scratching to get the bad out.  I would imagine she developed that somehow from seeing my mother’s techniques of cleansing me from evil.  Charlie is another story, though.  Charlie is angry and wants everyone to know it.  I don’t think I (or my therapist, or anyone for that matter) could approach the two the same, because their motivations are completely different.  I’m too exhausted to think about this more than I already have.

At the end of our session, my therapist asked if I’d be able to carry something home.  Confused, I told her “yeah, I guess.”  Then she took Courage, the stuffed lion, from the other side of the couch and handed him to me.  Courage has been sitting on that couch through many sessions.  He’s seen and heard it all.  He’s helped me come back to the present many times.  I thought at first she wanted me to take him for the day; then I realized she was giving him to me to keep.

“Don’t you need him here for your other clients?” I asked.

“I can always train a new therapy animal if I need to.”

Then I realized I would have to walk around town with a stuffed lion.  He was too big to fit in my bag entirely.  I managed to stuff him in there, but his head and upper body stuck out.  Maybe this was some kind of test.  What is my therapist doing to me?!  I was going to go straight home out of pure embarrassment.  Then as I was sitting at the bus stop, I told myself fuck it, I’m going to the store.  So I took the bus to a nearby retail store to scope out a new bike.  It’s an idea I had been going back and forth with for a while; with the possibility of now having two out-of-the-home jobs, I can’t rely on public transportation all of the time.  So Courage and I went and tried out some bicycles.  I quickly realized, upon sitting upon the first bicycle I tried, that I could not remember how to ride a bike.  I know that I must have ridden in childhood at some point.  But my mind and body did not want to do it.  I couldn’t put both feet on the pedals.  I tried another bike, and another.  My body started to shake and I knew it wasn’t going to work, so I left before I ended up having a full-blown anxiety attack.  I should know how to ride a damn bike.

I was disappointed, but I didn’t feel like going home and wallowing in anger or self-pity.  So Courage and I waited for the bus and then we went to the mall.  By now, it was mid-afternoon and I had yet to eat, so I stopped at Chick-Fil-A because they happen to sell chicken nuggets, the most delicious food on earth.  I had my bag on the table with Courage hanging out lopsided.  I felt kind of bad, so I took him out and stood him up on the table, right next to my bag of food.  I didn’t even care what people thought.  I even snapped a picture and posted it on Facebook, as if this stuffed lion and I were on some kind of adventure.

We even went for ice cream.

By this point, I was completely over the weirdness of being an adult and carrying around a stuffed lion.  I realized that I now had a stuffed animal, and my strong part had a stuffed animal, but I didn’t have anything for Charlie or Anna.  So, with time to kill, I ventured to the nearest store that sold stuffed animals – the Disney Store.  I managed to find a variety of dogs – perfect for Anna.  I must have circled the display three to four times trying to find something that screamed teenage boy.  Then, on my last round, I saw Baymax from Big Hero 6 hiding at the bottom of the display.  Robot, super hero, teenage boy…sounds good to me.  So now my parts and I each have something.  And if any new parts make themselves known, they will get one, too. 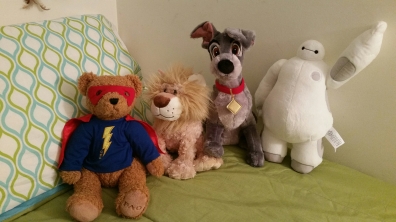 Maybe I’m not so terrible at this DID business as I thought I was.

4 thoughts on “A day with Courage”